Back to all posts

Rewriting the story of my life 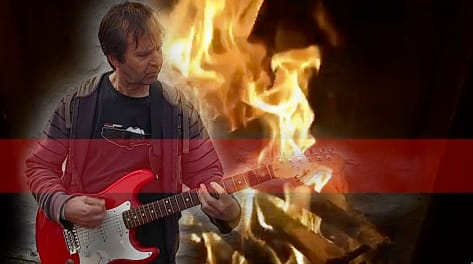 I've just made a video for a song I wrote and recorded 37 years ago. At that time I was 20 years old and I was in a band called 'After Science' which eventually came to be called Red Beat who released 3 singles and recorded a Jon Peel session. Back in 1978 though it was all about high energy rock. Our line up was me on vocals and two of my brothers Paul and Martin on drums and guitar with our friend Majid Ahmed on bass. We used to rehearse two nights a week for four hours in the evenings after work. Then we used to play live in local venues like The Nag's Head in High Wycombe. We even got record company interest from CBS who sent an A&R man down to see us play live.

We used to rehearse in a space called The Boilerhouse which was basically a factory boiler house converted and soundproofed for rock. This is also where we recorded the album Endless Waiting Game over several months with engineer Derek Timms. For many years this was just an unofficial cassette tape which had copies of our music on for our fans to play. it was only last year that I got around to re-mastering these songs and making them available on iTunes.

I called this blog, rewriting the story of my life. In a sense by revisiting and representing the creativity from my youth I am reassessing and re-evaluating the significance of these songs. The song from the current video is called It's Science. I've never really talked about what the lyrics meant to me when i wrote them. Now after a lifetime including studying English at university I feel its time to explain what was going through my mind when I wrote the line "Don't be hypnotised by the word."

It's Science (lyrics by Roy Jones)

The first verse starts by recognising the amazing contribution Einstein made to current thinking while contrasting this with the lack of progress in the understanding of death. I guess I've always believed that science is great for explaining the workings of physical reality whereas only philosophy or religion can explain the workings of life beyond the physical. Metaphysical thought particularly Taoism and the writings of Lao Tsu to me shone a more clear light on these more tricky realms. The danger being that sound, complex thought and poetry can often hypnotise us rather than enlighten us to the realm of the unfathomable truth. The phrases I use such as 'bitter, broken fingernails of ice' and 'brittle moment shattered' in the second verse are designed to seduce with sound while at the same time not deliver any real meaning. I am suggesting that many often used phrases such as in the second verse, "it ain't what you do it's the way that you do it"( I wrote this long before I saw Bananarama perform their take on this at Joe Strummer's club in London's West End in 1982) are merely sound bites without any real meaning. The phrase Reader's indigestible easy peace referred to the publication Reader's Digest which my Dad used to get. It took well known books and produced a simplified shorter version of the stories, dumbed down but often missing the true passion and grit of the original.

What then of the chorus? "I wanna play the leading role in a remake of 2001"? The reference here is to the film of Arthur C. Clarke's novel. The film was powerful and groundbreaking. It dealt with theme's like evolution, violence as a step forward on the evolutionary ladder, artificial intelligence and human consciousness as something separate from matter. Themes which still haunt the 21st century. I guess I was saying I want to be at the cutting edge of human development. Just what the last scene of the film was saying is difficult to say. Was it an evolution of consciousness or simply death visited with a different pair of spectacles? A mystery which was not to be solved by talking but to listening to the sounds of the universe without bias. Like mindfulness or meditation simply being in the moment.

I am planning to rework some old songs from 1984 which I wrote but never recorded at the time and have stayed so alive in my personal consciousness and musical brain. I performed some of them live' Water', memorably at the Bucks Club in High Wycombe and 'Air Waves' at Wycombe Live Aid. There are three other tunes as well which together comprise the EP's title, "The Five Elements" so look out for those.

Sometimes reflecting on the meaning of old song lyrics can help us rewrite the narrative of our lives. Stay well!